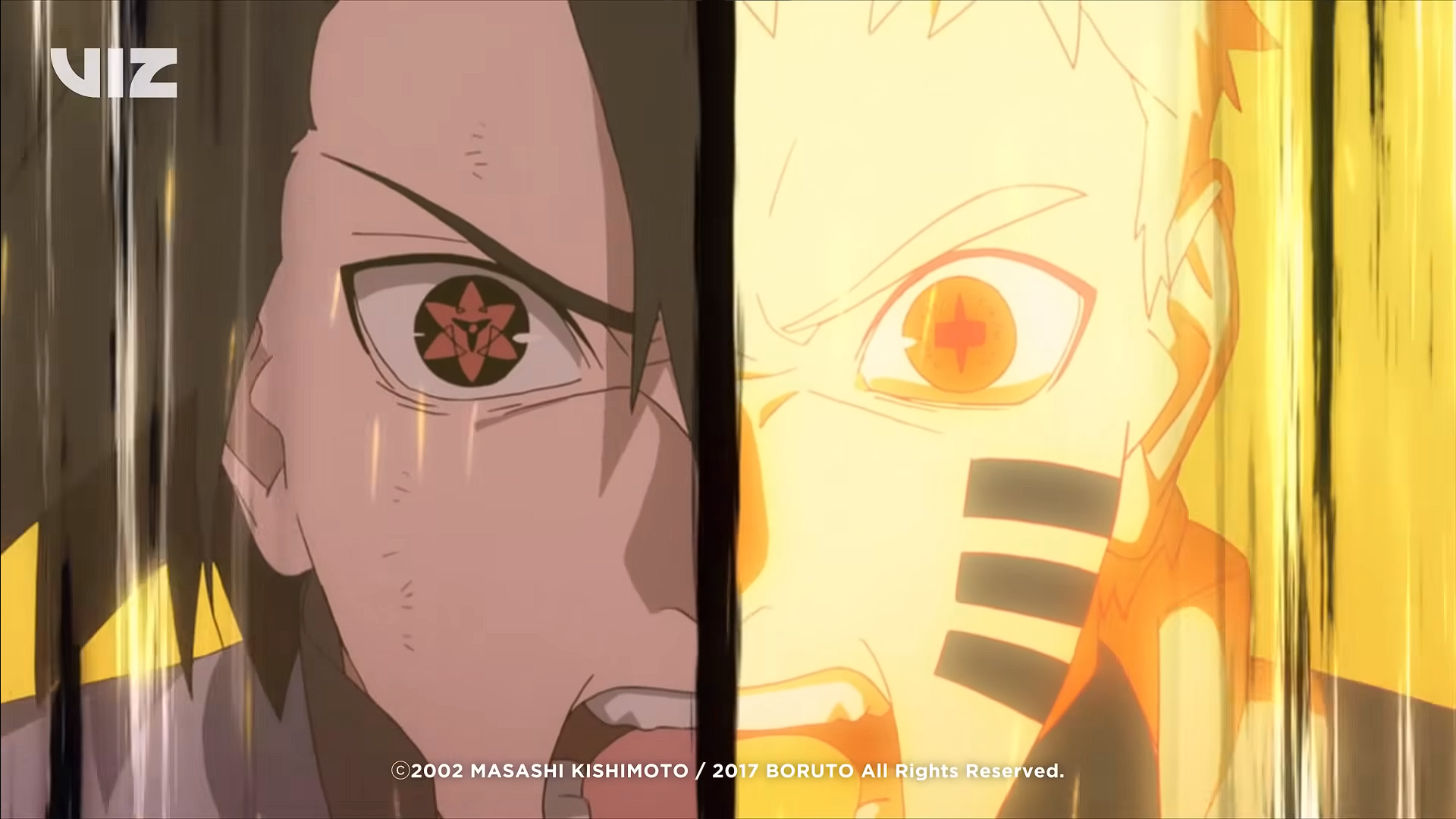 Nothing is better than a good team up. Whether it’s the protagonist and best friend or even a hero and villain. There is something about seeing two characters working in tandem that really gets me excited.

“But what team up is your favorite, Connor?” I hear you asking in your head. Yes I’m a mind reader, don’t be alarmed. My choice for the Tremendous Team-Ups event is one that was 19 years in the making, and is the culmination of many character arcs, immense growth, and change. I’m of course talking about the reunion of Naruto Uzumaki and Sasuke Uchiha. Specifically, their adult appearance in the Boruto: Naruto the Next Generations anime and Boruto: Naruto the Movie. These two scenes are the same, with minor tweaks to them. Mainly an upgrade in animation and storyboarding as they were done years apart from each other.

So what is it about this teamup that is so post worthy? As I stated above, this is the culmination of years of material. Naruto and Sasuke started off and continued as rivals throughout all of the Naruto series. Constantly butting heads, these two ninja were always destined to fight, which is exactly what we saw in the climax of the Naruto series, with them ending up as friends and comrades. However, what makes this so special is the fanfare behind this team up. Put yourself in the shoes of a fan of the series. If I were to tell you that the two arguably most popular characters after years of the story being over and years in real life passing, that those two characters would team up and kick some major ass, how would you feel? AMAZED is the only correct answer here. If it strikes you, I’ll leave the fight here and I highly suggest you watch it, even if you haven’t seen the series

The first thing I want to talk about is the choreography of this fight. From a narrative perspective there are so many callbacks to the series propper. From Naruto and Sasuke pulling a fast one with disguising as one of the massive shuriken just to pull another fast one on top of that with Sasuke disguising as Naruto’s ‘Rasen Shuriken’ technique just to out smart Momoshiki, to showing off the culmination of both of their most powerful techniques being the Nine Tails transformation cloaked in Sasuke’s ‘Susano’o’. The amount of fan service in this fight is exquisite, and the first time I watched it, it brought a tear to my eye in the same way as the portals scene from Endgame when all of the Avengers return to fight in that amazing last battle.

Finally I’ll talk about the animation, because while they didn’t HAVE to change it from what they did in the movie, I’m so thankful that they did. What was once a 90 second showcase turned into a 4 minute beatdown with animation that would make the movie’s animation cry like a baby. The stark contrast from what it was four years prior is quite astounding. You can tell that the animator’s cared about what was going into the scene, and it really shows. The fluidity of the fight, and the changing camera angles and dynamic style of shots makes the movie’s scene look like a highschool passion project.

To me, this team up is one that is near and dear to my heart. I remember staying up late when I was younger to see Naruto air on Toonami on cable television. I remember in highschool reading the manga weekly as it came out, with the series nearing its conclusion. So to see this years later, and see it done so well, it’s really something special to me, and that’s why I wanted to share it with all of you. You don’t have to like Naruto or even anime, all I want you to do is understand what this scene means to someone who does. The culmination of a story that started in 1999 leading up to this one triumphant, marvel of a scene. This is what a good team up is all about: giving the fans something that blows their minds and feels earned. That way, it gets a reaction like it did from me, with tears of happiness and jumping in my seat from excitement.