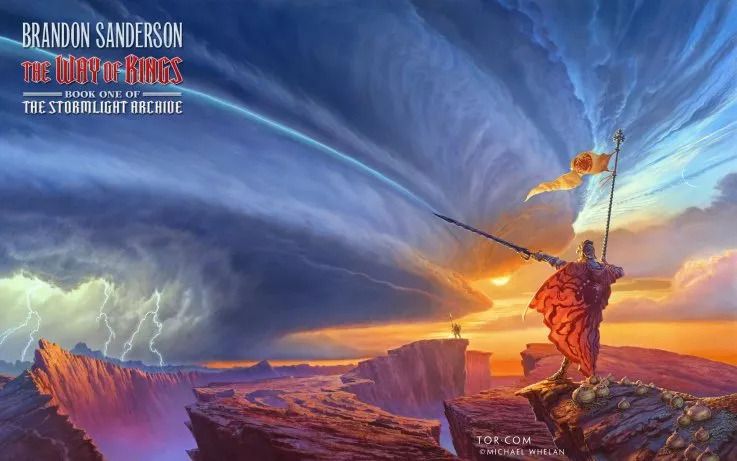 There are many ways to introduce someone to a story, to get them immediately invested into a plot. One very common method is to flood the audience with details in an attempt to get them interested enough to want to know more. To know how exactly those details connect to one another and the world.

When this method is done badly you get a confusing mess of a scene. Where the audience is being provided information at a rapid pace that’s either too confusing to really make sense of or too boring to entice you to continue the story. When it’s done well however, you get a fantastic introduction to a story that immediately gets you invested. Kind of like how Brandon Sanderson did with his book, The Way of Kings.

Szeth-son-son Vallno, Truthless of Shinovar, wore white on the day he was to kill a king.

These are the first words that introduce us to the world of Roshar, the world of the Stormlight Archives. Well, they aren’t really the first words if I’m speaking honestly. There’s a whole prelude (and yes a prelude is different to a prologue, high fantasy is confusing sometimes) and a sort of chapter introduction before this sentence. But this is the line where our story truly begins.

This first sentence does multiple things. Most obviously it tells us who our character is and what he’s going to do. His name is Szeth and he’s going to kill a king. Less obviously however it lays the groundwork for a few questions. What is a Truthless? What is Shinovar? Why is the fact that he’s wearing white important enough to be mentioned.

Overall this sentence is a one-two punch of set up. First it establishes some lingering questions to get the reader’s mind thinking, then it shoves all of those questions aside with the final statement. A king is going to be killed today and our character is going to do it. Immediately we’re being thrust into an extremely interesting situation. One with a lot of mystery behind it sure, but that type of mystery we can idly ponder about while we witness the interesting part(s) of the story.

The next line doesn’t grab you quite as much as the first but it still provides a lot of detail and questions in a short way.

The white clothing was a Parshendi tradition, foreign to him. But he did as his masters required and did not ask for an explanation.

So our assassin in white is working for others and from the sound of it he seems completely subservient to them. This may seem simple but it introduces a few concepts that will be reinforced later. Szeth does as he is told, he works for the Parshendi (whoever they are), and his employers are foreign to him.

I’ll stop going over each line as they come up now, most details we get further are to establish the setting and the current scene.

Szeth makes his way through a paty, a celebration between two foreign powers who are signing a treaty together. The Parshendi and the Alethi. Though it’s a treaty that will likely be short lived as one side is sending an assassin to kill the other’s king.

As Szeth nonchalantly doges drunks and other jubilant lords it is revealed that he himself doesn’t originate from either side. He is a foreigner from a land called Shinovar. Yet he works for the Parshendi to kill a king he has no connection to whatsoever, another interesting detail that makes us want to know more about this mysterious assassin in white.

Szeth being a foreigner serves multiple purposes in the narrative. Many of them are spoilers for the series, so won’t share them, but I will share the meta reason. Him being only vaguely familiar with the Alethi and Parshendi allows us as the reader to make an instant connection with him. Their costumes are just as strange to him as us after all and even small details about the way they celebrate, the clothes they wear, and their social hierarchy can be shared through the eyes of Szeth.

But anyways, all throughout his walk through the party Szeth constantly notes one interesting detail. The presence of Stormlight. Right now we don’t know exactly what Stormlight is, but we can glean a few details. To Szeth, Stormlight is holy in some way, it serves some kind of religious significance to him. To the Alethi, Stormlight is merely the thing they put in their lamps so they can light hallways.

It is a very strange distinction between Szeth and the Alethi. One that we can’t really understand well. After all, us as the reader know that in real life there’s nothing holy at all about the electricity that makes our light bulbs flick on. But, we’re given a bit more context to this difference in perspective right as the scene ramps up.

Szeth stops in the middle of a hallway, standing before one of the Stormlight lamps hanging on the wall. He cups his hand around it, as if trying to catch the light. All of a sudden two guards round the corner and notice him.

The guards don’t immediately spring into action, they don’t try and spear Szeth upon sight. Instead they tell him he can’t be here and that he needs to leave. And when he doesn’t react they say it again, a bit more frim perhaps but in an overly hostile way.

Then, Szeth breathes in the Stormlight. And all of a sudden we as the reader begin to understand that we aren’t following our main hero, an important side character, or even just a one off view for the prologue. Instead we’re following the walking, talking, inciting incident for the story.

As Szeth begins to glow with Stormlight and we start to understand how dangerous he really is, the guards do as well. And they- well, I’ll just let the text speak for itself here.

“What am I?” Szeth whispered, a bit of Light leaking from his lips as he looked past the man down the long hallway. “I’m . . . sorry.”

This final line adds one last important piece of context to Szeth and his character… his reluctance and his regret. He doesn’t necessarily want to be assassinating the king and killing whoever gets in his way. But he has to for some reason. Whether it be for money, culture, or any other reason we can’t tell right now. He must obey the will of his masters and that means the king and in any guard in front of him must die.

From there on the story launches into a fast paced action scene detailing how Szeth tears through the palace searching for the king he’s meant to assassinate. It’s a thrilling action packed scene to help break up the monotony of world building, it teaches us a lot about the magic system of the world, and adds more and more onto that initial pile of interest.

I’ll finish my description here however, as I wholeheartedly believe that this opening sequence is better read than described. But needless to say that on my initial read I was completely and utterly hooked by the end of this chapter. Especially with the last bit in it, which establishes a question that both you and the characters will ponder throughout the books.

The key to hooking any audience member is to provide just the right amount of info, as to make sure they’re not completely confused, along with providing interesting ways to convey those details. There’s nothing worse a story can do than starting off boring after all, well apart from being both boring and confusing that is.

If you want to read the Stormlight Archives for yourself, then I would recommend following the link below to tor.com where you can read the first three chapters for free. I guarantee you it’s at least worth reading the prologue and if you just so happen to find yourself as entranced by the world as I was, then you can find the full book just about everywhere in physical, digital, and even audio format.

Anyways, that’s all from me for now. As you might have noticed I’m a new writer on this website and I hope you’ve enjoyed my “debut piece” so to speak. I look forward to sharing more! Until then I wish you good fortune, hope you enjoy many good stories, and always remember: If you see a mysterious white assassin who glows with Stormlight, run away before he can get around to apologizing.