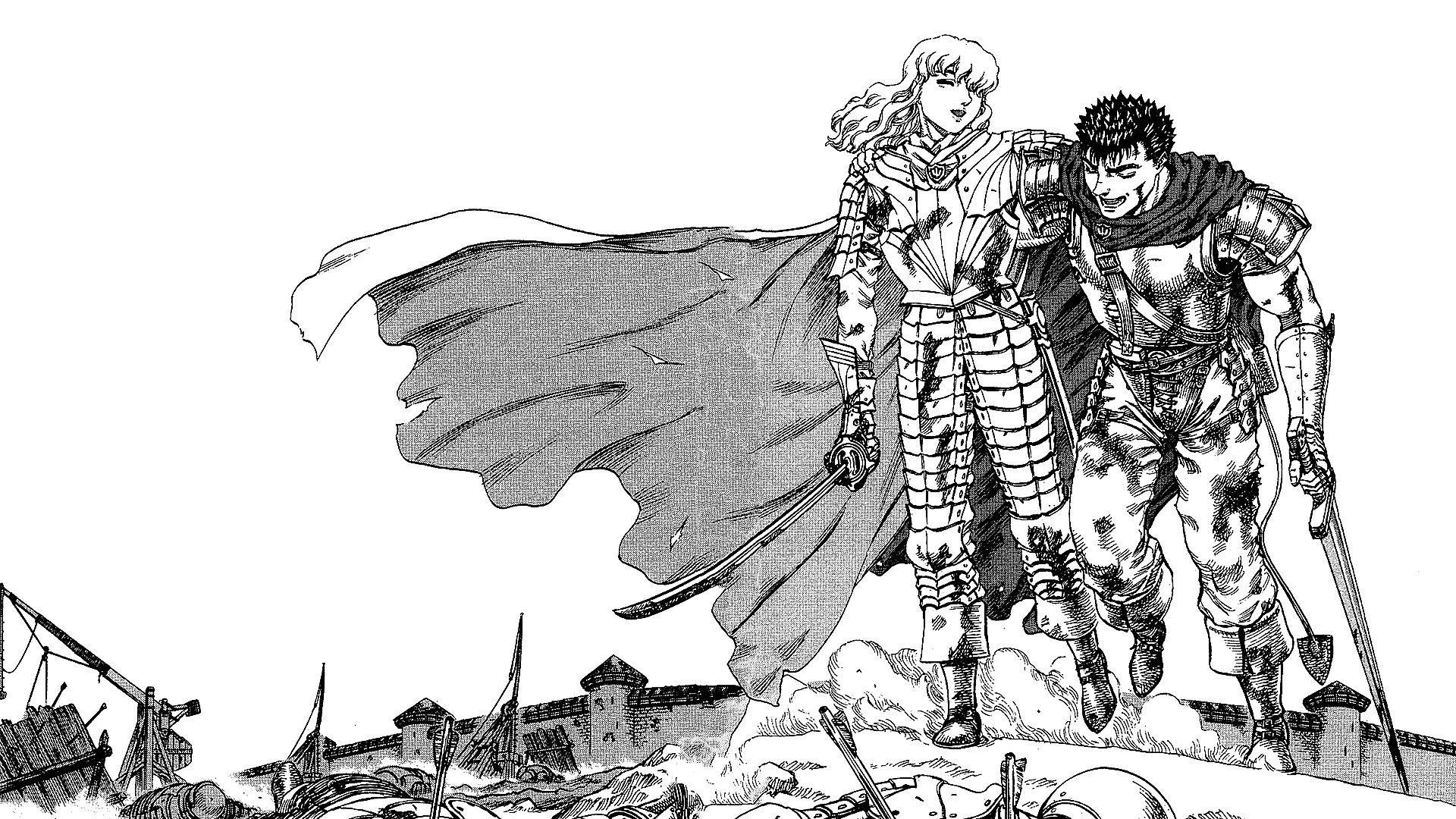 “Throughout my life, the moments, and people who have defined me… they have all been illuminated by sparks.”

This one is gonna be a real test. A trip down memory lane for me, and maybe for some others reading this, but probably a bit of a wild ride for those who don’t have any experience with the story of Berserk. And for a story that’s had as long a runtime as this one, there’s definitely a lot to unpack here, so let’s get started.

This is the part where I tell you that there will be spoilers for the story if you continue reading, but this time I also wanted to put a disclaimer for the folks at home. The story of Berserk depicts a lot of graphic content, the likes of which is NOT limited to violence and gore. It is a fantastic read, but it truly demonstrates how awful the world of Berserk and some of the beings that inhabit it are. In all honesty, if you are not fit to handle the depictions of something traumatic or even simply unsure if you can, there is nothing wrong with skipping out on this series. There were definitely some things I read in this manga that I couldn’t get out of my head for at least a week, so tread carefully and be prepared.

I had a lot of trouble pinpointing which series was really in my best judgement to write about for this prompt. I thought about gushing about Netflix’s Arcane, fought off the urge to talk about more One Piece (specifically the Arlong Park scene, you know the one), and pushed things like Fire Emblem: Awakening and The Adventure Zone to the wayside. In the end, though, nothing seems more fitting for this prompt specifically than Berserk. By the end of this article, the words “Guts” and “Berserk” aren’t going to feel like real words just from the sheer amount of times I’m probably going to have to say them. And hey, if you’re one for video essays (and continue to not be dissuaded by spoilers), then might I recommend this video by Super Eyepatch Wolf. It’s a recent one of his as of the time of writing this, and his voice is nice to listen to so it doesn’t hurt for me to offer it, you know?

If you take this series at face value, especially when you open up to the LITERAL FIRST PAGE, you’d think it was just about how “cool” and “violent” a story can be. Shock value for the sake of shock value. For the first maybe 350 pages, you’re absolutely beat over the head with eldritch horrors, intense maiming, and people describing and succumbing to corrupted wishes of destruction and suffering. In later chapters, the torment of those that reside in this fictional world gets to be bad enough that it makes you need a break from it all seemingly every few pages. But despite all this, it truly is a masterpiece about healing and forgiveness, emotional and mental growth, persistence in the midst of hopelessness. The intensity of it all paves the way for the characters to overcome what looks and feels like insurmountable obstacles and strive to simply be.
Now, as great as all that is, there’s not really a set point where that is in the story, it’s pretty consistently littered throughout. These themes, the art that goes from pretty good to A B S O L U T E M A S T E R Y O F T H E C R A F T , and the genius use of paneling and spectacularly refined ability to show action in motion are all reasons to stick with Berserk (not to mention that Kentaro Miura aces character writing), but for me, there really is a spot that I can physically point to and say “This. THIS is the spot that made sure I was caught. This is what solidified the fact that I was enraptured”. And I bet I’m not the only one either.
What I’m talking about is the introduction and characterization of Griffith of the Band of the Hawks.

First of all, can we just take a moment to talk about character design? Like, come on man, not only is it clear and concise that Griffith (man of the right, just in case that wasn’t clear) is the foil to Guts (on your left), but there’s just so much to gleam off of what you can see. How gruff Guts is to how regal Griffith is. The strength of one and the grace of the other. The sharp look to Guts’ hair versus the light waves of Griffith’s. A face that is soft on the eyes, whereas the other is MISSING an eye, battered by battle. The one-man-army as opposed to the man with more than enough ability to command his own army. Just top notch stuff there, man.
But anyway.
There is a reason I say that specifically the introduction to Griffith of the Band of the Hawks is the point I’ve chosen. Berserk starts off at a certain point in Guts’ life where he looks more like he does in the above picture. After we’ve spent some time with a distant, abrasive Guts, including “meeting” Griffith, we enter the Golden Age arc of the series, where we are suddenly taken back all the way to the start. We go back to the day Guts was born. Over the course of a decent chunk of the story, we see Guts grow up and the kind of life and world he was thrust into.
A really shitty one, to be exact.
Little dude grows up amongst a mercenary band, meaning he doesn’t get a childhood. Guts learns swordsmanship skills and my guy lemme tell you right now, that’s about it. Honestly man I don’t even remember the name of Guts’ dad and I actively choose not to search it because that implies he deserves enough respect for me to associate him with a human name. If there was a world record for how fast someone could lose their right to a “World’s Greatest Dad” mug, this dude would be the guy to hold said record. It’s bad, buddy, and it’s one of those things I was giving my trauma disclaimer for.
But, for the sake of keeping this train moving, we skip that. Over the years, as Guts becomes a bonified MACHINE the likes of which is unstoppable in a fight of metal versus metal, he ends up with a sack of cash worth drooling over. He had taken out an enemy captain whose name was worth the coin and, upon leaving with his reward, was attacked by some men on horseback who wanted what he had earned. On his own, Guts took on these men without any issues, and they turned out to be members of the Band of the Hawk, a mercenary band famous for their caliber of battle and strategy.
Sidenote, sorry. The video essay I linked above includes this talking point, but it was a thing I legitimately didn’t even notice until Super Eyepatch Wolf brought it up and I just think it’s really cool. Typically when depicting characters dueling it out with swords, manga and comics will show the point of impact from the blade. You’ll get an image before the strike, during the slash, and the aftermath, right? Well since Guts is THE original swordsman-to-use-a-sword-way-too-big guy, and his sword gets described as “…much too big to be called a sword. Massive, thick, heavy, and far too rough. It was like a heap of iron”, Miura instead gives you images of the buildup to the sword strike, and then the aftermath. A sword that big cannot simply have a single defining point of contact to truly show off its sheer power, especially when Guts is tearing through entire mobs with one strike.

So yeah that’s what he did to some dudes. He didn’t do it to all of them, granted, but it’s like butter for Guts. Once the remaining men saw what he could do, they kind of backed off. But uh oh, the issue is that this leads to Griffith getting involved, and everyone talks this guy up like crazy. The thing is though, yeah Griffith fights Guts and yeah Guts killed some of his men. But Griffith doesn’t kill him. He brings him to an open area atop a hill, and tells him-

And there’s something strange about his calm confidence, his unbreakable determination, easy smile. The themes of forgiveness and human persistence amidst a world that feels hopeless is again, like I had mentioned at the start of this post, a big theme throughout Berserk, but this is different. Griffith isn’t just letting Guts’ actions slide, he isn’t just acting on a whim. The art and dialogue conveys something more, something that doesn’t yet answer the conundrum as to who Griffith is.
And so they fight to decide if Guts stays or not, of course.

And for the first time in a while, we see Guts outclassed. We see him not only fail to put a scratch on his opponent, but for his opponent to be in complete control of the fight. Seemingly with ease, even. And once Griffith’s got his victory secured?

Griffith’s presence is constantly both calming and intimidating. His goals and desires are conveyed to everyone, both the characters and the reader, as definite. Undoubtedly achievable. Fact, and not fiction. He lacks any sign of ineptitude at all turns. Griffith IS determination, and unrelenting determination at that. His way of going about things, wording things, everything is so mesmerizing and I DARE you not to be captivated by it.
And this is just one character. One scene. A fraction of a fraction of what is objectively one of the greatest pieces of fiction of all time. Kentaro Miura, who unfortunately passed away last year, has poured years of passion and hard work into this story. Berserk can be a lot of weight to carry at certain points, there’s a lot to unpack with it.
But there are moments within it that are beautiful. There are characters and pieces of art and twists that I will never forget. It’s a wild ride, and for that-