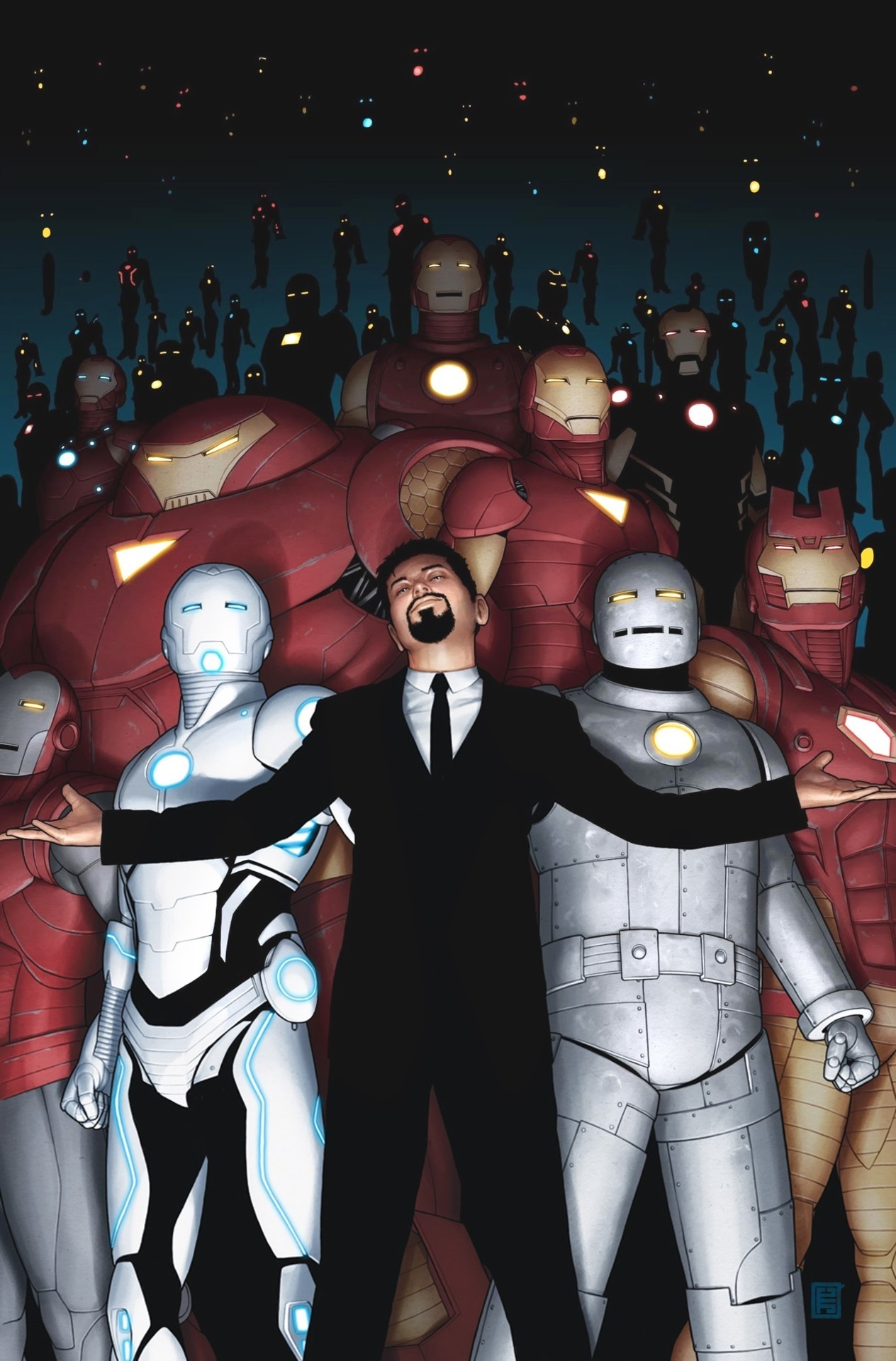 A suit for every occasion

In worlds filled with super powered heroes and threats that vary from stealing your purse to stealing your multiversal existence, the Marvel universe is in no short supply of things to enjoy. Over the past decade plus, the global recognition for these things has skyrocketed into the mainstream, in no small part thanks to the success of a lesser known B-ranked character in their first film for the silver screen. The journey of Tony Stark, as portrayed and owned by Robert Downey Jr., from selfish inventor and war profiteer to a hero capable of making the ultimate sacrifice really helped jettison the character into the forefront of pop culture in ways not really seen aside by the likes of Spider-Man. Before all of this though, the character had gained a status of infamy in a 2006 event called Civil War, which saw the hero community split after the creation of a Superhuman Registration Act following tensions that boiled over with the general U.S. population and the regulation of superpowered individuals. The role Tony took during this time was as one of the main supporters of the SRA and assisting in its enforcement, to the detriment of his past relationships and connections. Despite the implications of his actions over in the comics, the status of Iron Man would be linked to the crowing performance(s) of Downey and general success of the MCU, going as far as to alter the approaches new comic creators would take with the character moving forward since his debut. It’s an odd turn of events and you don’t always see it play out like this. Hey, you got as second, because I want to talk about it and what’s allowed Tony Stark to have such a lasting impact with fans for nearly six decades and counting. Suit up and come learn about Iron Man, Inventor and founding Avenger in this week’s post and the next entry in my “Top Heroes” list.

Born to Howard and Maria Stark, Tony was gifted with intelligence. With this gift, he was enrolled into boarding school at age 7 and found it difficult to communicate with people. When he began to see machines rise as the newest feat of engineering, he would forever be hooked, enrolling into MIT at age 15 and graduating a mere 4 years later with PhDs in Physics and Engineering. At age 21 he would experience the loss of his parents via a fatal car crash and later inherit Stark Industries, his families tech company which was focused in weapons manufacturing. Tony wasn’t the best person for the job and promoted his secretary, Pepper Pots, to be his executive assistant to handle most of the workload. Then came a came a war of your choosing: Vietnam. Gulf, or Afghanistan. His origin updates to fit the times, matching whatever big war the U.S. is participating in. Small factoid there for ya.

While presenting a test of some new weapon(s) for the military, Tony was attacked, ending with shrapnel in his chest, and captured by a warlord. He forced Tony and another captive, Yin Sen, to build a weapon for him or be killed. A pretty bad trade deal all together. He and Yin Sen didn’t have a whole lot of time to work together, Tony was dying. Together though they created the arc reactor to help keep the shrapnel out of Tony’s heart. Now equipped with the means to figure out an escape, he created the very first iteration of one of the best suits of armor in fiction: the Iron Man. During his escape Yin Sen was killed, his death fueling Tony to use the suit to avenge the loss of his friend. The Iron Man suit allowed him to prevail and he gained a new lease on life once he returned home. The story continues as he withdraws Stark Industries from weapons manufacturing to pivot into something more constructive for the world. Like most marvel characters who’ve been around since 60’s, his antics as Iron Man would continue too as he went on to be a founder of The Avengers, where he would be famously tied. He dealt with alcoholism in a famous storyline called “Demon in the Bottle,” which at the time was among a wave of comics delving into more mature themes. He also had his tech stolen, like a lot, having it be repurposed for villainy in a storyline called “Armor Wars.” There’s tons more with both his solo and team careers and in usual fashion I’m going to direct you towards an outside resource: Comic Vine.

That site is my go-to wiki for all things superheroes, been a fan for a few years now. Try looking up anyone you’re interested in and get back to me with some of your favorite learned facts! Let’s move onto the fun stuff: talking about the abilities of Tony Stark and the different armors he’s built over the history of the character.

As stated earlier, Tony has a gifted mind. He is considered to be one of the most intelligent individuals in all of the Marvel Universe. He’s helped create numerous inventions for others such as S.H.I.E.L.D.’s famous Helicarrier and The Quinjet for The Avenger’s. He’s been more of a supplier while on a team, letting other’s lead most of the time. I think he just liked knowing he could keep those he cared about stay safe and that was one of the better ways to do so. The advancement of the Iron Man armor has always been the highlight of the character. Each new iteration is built to overcome a new problem in Tony’s life and man has he had problems to deal with for sure. He’s made suits to overcome the harsh environmental conditions of the ocean and even space. Suits for stealth and the busting of gods and hulks. He has a large wardrobe and likes the options haha. I’ve curated this playlist of Comics Explained videos since he’s gone over a huge portion of the armors for us all a few years ago:

What a great guy that Rob is, he saved me some time again haha. Needless to say, the Iron Man armor is the main thing that separates Tony Stark from most comic heroes. Being able to summon a suit of armor that grants you the ability to do so many different things is so rad. Anyone who says that the Iron Man armor isn’t cool is probably not cool themselves and that’s ok. They have to live with that, not you.

A Shellhead for us all

When I first came across Iron Man, the coolest thing to me was always the fact that Tony wore armor that granted him the ability to do so many things that my young boy brain could only ever dream of. The biggest thing was the ability to fly. I had been enamored at a very young age with being able to have some way of traversing the world. Whether it be super speed, teleportation, or the ability to fly I had dreamt of being able to do it all. The Iron Man armor has inspired me to design a few armors of my own over the years too, all granting some sort of traversal abilities. Some were tech based and others where not, but all tried to create the magic of the Iron Man armor. As I grew older I found a very grounded love for the iconic get up, as it stood as piece of science fiction that I wanted to see fully realized through modern engineering and was finding that others were too. Full suits of armor were not becoming too common or really seen as practical, but sure as heck people developed exoskeletons that allows increased capacity for lifting and variations on jet packs. We’re truly in the future and although the possibility of a suit of Tony’s caliber existing in real life is slim for the time time being. The fact that certain technologies exist or are being developed that could lead to it however sure is exciting! Now, let me touch on the MCU here for a moment.

I won’t deny that the MCU did to me what it has for many others, it made me idolize Robert Downey Jr.’s portrayal of the character above anything else. It’s not something I openly admit since it’s really no different than the majority of MCU fans. I guess I just don’t want to be called a normie, is that too much to ask? Anyway, what really captivated me was how human Downey had portrayed Tony. The evolution felt organic and with several films, we were allowed to feel invested in the growth. He started as a cocky, selfish, and short sighted man who didn’t have an appreciation for the smaller things in life let alone the people involved. As time went on he grew and learned the value of people and the time spent with those you love. He learned to protect those things and even how to work with others to achieve the same goal(s). He wasn’t perfect, he made mistakes which caused others to get hurt or worse. In the end though, even Tony had a heart too. He grew and pushed himself to improve. He stands as proof that we can get better, no matter how hard we may stumble. That the things we care about are worth fighting and even sacrificing for. You can take away his house, all his tricks and toys, but one thing you can’t take away – he is Iron Man.

The end of a few things…for now

We’re now at the end of yet another entry! I’m glad I got to talk about Iron Man for a bit. He’s been around for close to two decades with me. With this one complete though, we’re going to halt the “Top Heroes” list for a spell so I can get back to randomly chatting about things. I’ve been sitting on a few topics since the year started and now after completing half of my list, I feel this’ll be a better time than any to transition. I’ve been told that people have been enjoying the overview of my favorite heroes and I’m glad! It’s been fun for me to talk about them with you all and I’ve began to understand my enjoyment of them on deeper level too. Wowee, good stuff all around. I think what I’ll look to do is continue them in between random chatting or write about the remaining once a month. What do you think? Let me know either in the comments to this post or on our socials, let’s get some interactions going! For now though, I’m signing off. Thanks again for reading and as always be well and be safe!