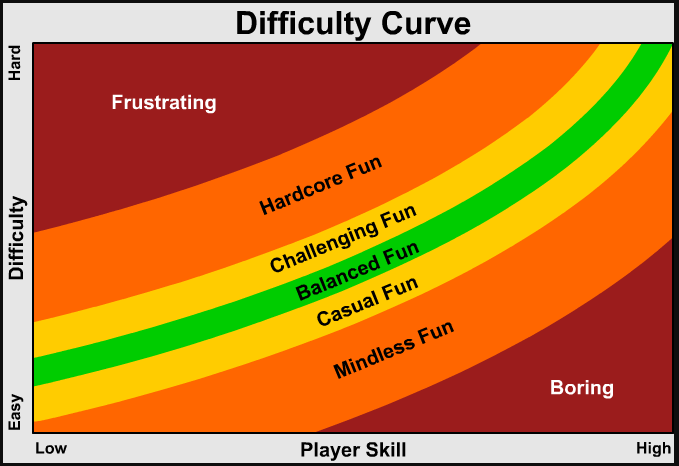 Hey there, reader, how’s it going? How’s the weather been for ya? I’ve been enjoying the temperature drops where I’m at, it’s about time for Texas cool down. With some luck I’ll be hopefully able to comfortably wear pants by November. Maybe that’s not important to you, and that’s fine.

Alright now we’re abandoning that intro and we’re going to go ahead and get into the random chatting. Hopefully you have a second because we’re starting now!

A Chat About Selecting The Highest Difficulty

When it comes to video games, I’m generally not looking for a testing experience. What do I mean by that? In very simple terms: I’m looking to have fun and relax, not have my patience boil over in frustration. I know the challenges a player may face with a game can stem from numerous things. For instance the game could have been poorly designed and/or optimized for your system, I’ve seen this plenty of times over the years. I use to force my old laptop to play games that would cause it to wheeze for air which translated exactly into me playing at 20 fps(frames per second) with my system seizing up as it tried to keep up with the demands of each game I’d try to play with my friends. Another one and my personal favorite: user error. You’re pressing buttons without thinking about what the buttons actually do, which of course leads to random positive or negative outcomes. New players and button mashing, like toast and butter haha. On the other hand, maybe you thought you were better than the tutorial and skipped it or you let the helpful information wash over you, all the while not a single drop of helpful information made its way into your brain. Whatever the reasoning is, most frustrations come down to user error, which I’ll be referring to as the game ‘skill checking’ the player.

What is a skill check in a video game sense? To put it simply, it’s when the developer designs an experience that’s meant to challenge the player’s understanding of the game. It could be explained as turning the dial or heat up if that’s easier to conceptualize. I like it when a game ‘skill checks’ me because it’s an opportunity to prove my understanding of the tools and resources provided by the developer to overcome their challenge. In a well made game the skill curve, which is just the direction in which difficulty grows in relations to time spent, is handled with respect to the player. I play most new games on ‘Normal’ to see how the developer intended for their game to be approached at each stage of the experience. It’s natural for the opening couple of hours to be the easiest, but a rise should be expected if not outright apparent by the midway point. By the end you should feel competent or at very least equipped enough to tackle the final challenge(s) set before you to complete the game. A small lesson in game design for ya, free of charge!

So now that I’ve rambled a bit, let me briefly tell ya about the two games I’ve beaten on their highest difficulties, why, and my experiences with them.

Starting with Marvel’s Spider-Man, I went and completed a second playthrough because of a few reasons:

So how did that playthrough go? Pretty well until the third act haha. I won’t go into why because it’s tied to the narrative of the game, but it comes down to the enemy types that are introduced during this part. They were difficult in my first playthrough and outright brutal during my ‘Ultimate’ playthrough. I got ‘skill checked’ so much in the last act that it humbled me into realizing that I was just better than my friends who played the game and that was it. In summary, I enjoyed the challenge and only a few times felt overwhelmed by it. Overall overcoming the playthrough felt very rewarding and truly allowed me to feel like the Ultimate Spider-Man.

Next is my recently completed ‘Insanity’ playthrough of Mass Effect: Legendary Edition. I mentioned this on the blog before that I had started this back in like May I think? I’m not too sure, but it took me up until last Monday to complete all three games on the ‘Insanity’ difficulty. Not inherently because of the difficulty, I just struggled to find consistent time to play. So why did I want to do this:

Good ol’ PlayStation TROPHY HUNTING, the main reason why I replay single player games. Ya know I still don’t have all the trophies for all three Mass Effect titles and the Legendary Edition. Will I go back for them? Absolutely, I just have to make the time. Anyway, let me tell ya that those Reddit users weren’t kidding, ‘Insanity’ is heckin’ hard. It stands as the most difficult single player gaming experience I’ve had to date. The most difficult game, which I called out from the beginning before I started the first one, was Mass Effect 3. The Reaper forces where brutal, which from a role playing perspective really immersed me. From the player perspective, you’re facing the cronies of the main threat of the series, of course it’s going to be hard. I kid you not, I had to live behind cover like it was my job. If I hadn’t leaned into that aspect of the series and instead opted for a ‘run and gun’ approach, I’d likely still be back playing the first game. Anytime I would try to take the offensive, I’d get ‘skill checked’ by having my shields be taken down by a grenade, forcing me to move to new cover, which at the point I had a second to decide where to go since being shot more than two times by any damage source meant death.

So all this to be said, did I enjoy the experience? I think so, I’m mostly glad it’s over if I’m being honest. It wasn’t the fun type of challenge that Marvel’s Spider-Man was. More torture at it’s low points for me as player. I will say though, from a roleplaying experience, bumping the difficulty made the threat of the Reapers more of a thing to fear versus to deal with as you would any other enemy. I appreciated that at least haha.

I don’t have much else to say so I think it’s time to wrap this post up!

Well that was a lot of rambling if I do say so myself haha. I hope it all came out alright and if not, well there’s always next week! Until then, be well and be safe, I’ll talk at ya soon.