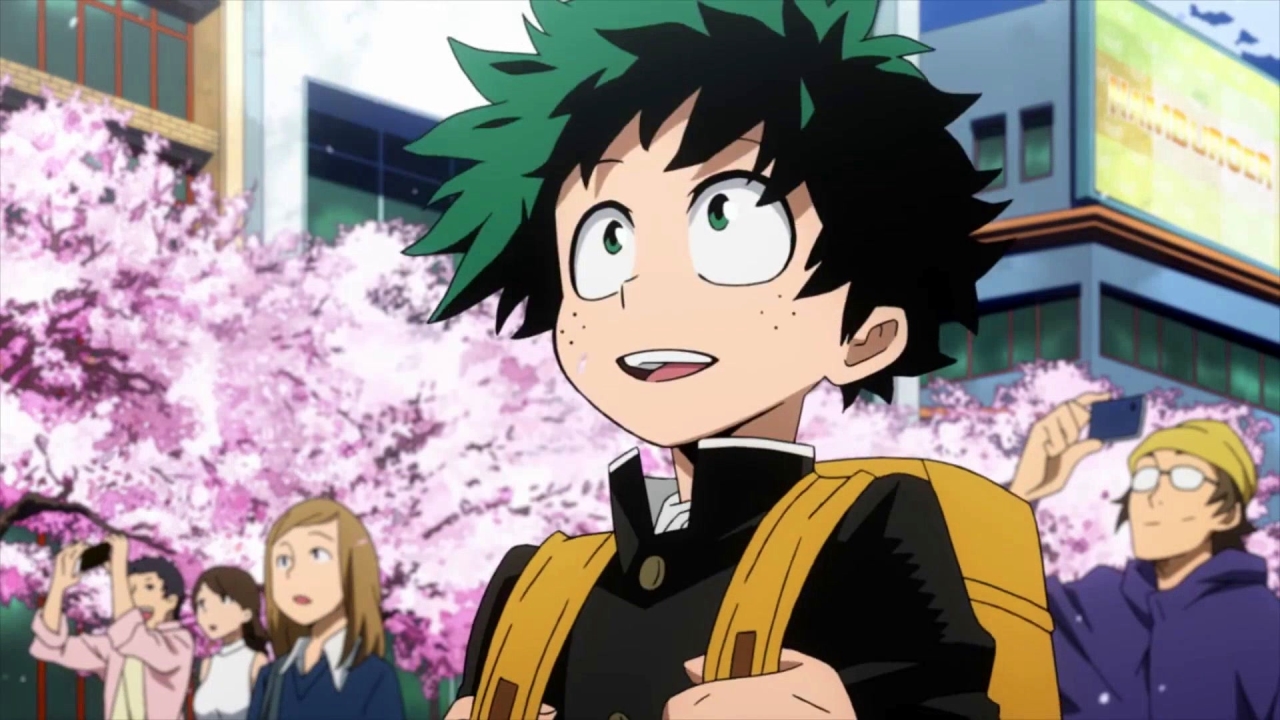 “Here’s the sad truth; all men are not created equal. When I was four years old, I learned that some kids have more power than others…But that won’t hold me back. If anything, it pushes me to do better!”

Before we can discuss what the most heroic moment is, we must first define what makes someone heroic and by extension a given moment. There are numerous definitions with varied thoughts on what makes someone a hero, but they all have a few crucial ideas in common. That they act courageously even in the face of overwhelming odds, that they act in service of others even at detriment to themselves, and that their actions are of their own volition. You cannot force someone to act heroic, heroism is born of an individual’s desire to help others in need. Therefore a heroic moment would be defined as someone voluntarily acting courageously in the face of overwhelming odds to help or save another, even at great personal risk.

The moment I am going to be discussing is from the manga/anime My Hero Academia (Boku No Hero Academia) and happens over the course of the first two episodes of the show. It is the moment that “hooked me,” that convinced me to watch every episode the show had and would ever release. It quite literally sent shivers down my spine and even did so again when I re-watched it in preparation for writing this. Thus, I cannot stress enough that if you haven’t seen the first two episodes, I implore you to do so before continuing to truly understand the whole experience. Even if anime isn’t your cup of tea, two twenty minute episodes isn’t a big commitment and you might find a show that really resonates with you like it did me. So please give it a shot; it’s currently streaming on Hulu, Crunchyroll and Funimation.

Before we can fully appreciate the heroic act, we must first appreciate the setup and buildup for it. This story starts in a modern-day world where over 80% of the population born has some form of superpower or supernatural ability. These powers were given the name ‘Quirks’ and in this superhuman society many used their Quirks for crime and evil to become ‘Villains’. Thus the profession of ‘Heroes’ was born to fight these villains, with government oversight and laws put in place to ensure that no one abuses their powers. These heroes become public figures that the general populace adores and often aspires to, including our protagonist Izuku Midoriya.

Midoriya was born ‘Quirkless’, yet in spite of this he still aspires to be a great hero; even when the entire world seemed hellbent on convincing him it was impossible. Even as a child he was grossly aware of how imbalanced the world was as his bullies used their ‘Quirks’ to pick on the weaker kids, whom he tried to stand up for. Rather than despairing at this fact, it simply pushed him to be better. He began to write notes on all of his favorite heroes so that he could learn from them. By far his favorite hero, the number 1 in the country, is the one named ‘All Might’. He was the fastest, strongest, most charismatic hero who always saved the day with a smile and Deku would watch the same clip of him hundreds of times as a child, grinning every time.

In order to give oneself the best chance at becoming a professional Hero, high schoolers were encouraged to apply for schools specializing in Heroism and no school was more prestigious in the country than U.A. It was the school that ‘All Might’ called home to as a young man, so naturally Deku wanted to make it there too. However, this earned him much ridicule from his classmates and even resentment from one particular student. Katsuki Bakugo, a kid who had bullied him his entire life and was viewed by all his peers and teachers as a gifted prodigy destined to succeed. He viewed Deku trying to go to the same school as him as nothing short of a personal attack on his greatness. This caused his bullying to get even more severe in order to try and scare him away from going to U.A. This included him burning his hero notebook and tossing it out the window, telling him that if he wants a chance to be a hero then he should take a swan-dive off the building and pray he’s born with a quirk in his next life.

When walking home from school after a particularly rough day of bullying, Deku got attacked by an extremely powerful villain whose entire massive body was composed of sludge. The villain was going to suffocate him so that it could steal his body and escape from a hero that was chasing him. As Deku struggled against it he realized he couldn’t do anything to break free. Any grip he tried to get just slipped and sunk into the sludge, the villain was freakishly strong. It seemed he was doomed, however this string of bad luck ended up becoming a chance encounter for him when ‘All Might’ arrived to save him. After he defeated the villain and put its body into large empty containers and signed Deku’s notebook, All Might leaps away. However, Deku had a question he needed to ask him, one that had been burning inside him his whole life and so he clung onto All Might’s legs as he jumped hundreds of feet in the air. They land on a nearby building and now alone on the roof, Deku asks his question: Could someone who isn’t special and who doesn’t have a quirk still become a hero? He was asking for about himself really. Even his mom didn’t believe it was possible, saying “I’m sorry Izuku… I wish things were different.” This may have been the last ray of light shining on Deku’s dream of becoming a hero, maybe if All Might could validate his goals and tell him he could be a hero, things would be ok.

To his shock and despair, All Might told him no. He explains that in a fight with a really powerful villain 5 years back that All Might lost several organs, only being able to use his super powers for about 3 hours a day and that he was already at his limit. He tells Deku that being a hero isn’t easy, that his signature smile was just a brave face he puts on to hide the fear he feels and that some villains couldn’t be beaten without Quirks. That it’s not bad to have a dream, but that they should be attainable and realistic. He should just become a cop if he wants to help people without a quirk. Needless to say, this absolutely devastated Deku.

On his way home he notices a villain attack happening in the distance and subconsciously checks it out. He overhears that the villain has taken a hostage. As he pushes through the crowd to see what’s happening, he sees the sludge villain from before, the one All Might defeated. Realizing that when he clung to All Might’s legs, he accidentally knocked the bottles loose and freed the villain, a rush of guilt sets in. A large group of pro heroes were on the scene, but none of them were able to do anything. Claiming that “none of us have the right quirk to stop a villain like this.” As the situation continued to get worse, Deku noticed the face of a terrified Bakugo being held hostage. The bully who spat on his dreams at every possible opportunity, who tossed Deku’s hero’s journal out the window and into a fountain full of fish, who quite literally suggested Midoriya kill himself if he wants a better life. Who berated and belittled him in front of the entire class for dreaming to become a hero. This was the hostage the sludge villain took.

Many people would step in to help a friend or loved one in danger, some might even help someone they don’t like. In a scenario where the people trained to resolve a situation are failing and your biggest enemy is the one at risk, stepping in to help would be unheard of. Yet that is exactly what Deku did. What makes this moment truly heroic, the most heroic, is that all his life the entire world had been telling Deku he couldn’t be a hero. His family, his teachers, his peers and even his personal hero All Might, the one who inspired him to want to be a hero in the first place, told him it wasn’t possible. Not only that, but Deku had already encountered this villain before and he was powerless to stop him. The sludge villain nearly killed Deku, him only surviving purely based on luck. Yet in spite of all this, Deku did not hesitate for an iota of a second to step in and help, rushing towards the villain to try and save Bakugo. And ultimately, he did. Remembering his notes on what a hero would do, he threw his backpack at the villain and part of his school supplies jabbed it in the eye, giving Bakugo a chance to breathe again. He then tried to claw Bakugo free from the villains grasp, stating he couldn’t just stand there and watch him die. This inspired All Might to push past his limits and save them. Deku inspired not only the number 1 hero, but me the viewer. This show encouraged and inspired me to take risks that I was afraid of in order to be the person I wanted to be. To this day I still find myself bettering my life because of this moment. If that isn’t heroic, I don’t know what is.

Thank you all so much for reading, I sincerely hope you enjoyed this and this new format. As I was writing this I ended up having to restrain myself constantly, as I kept wanting to add more and more details. I had to remind myself that the aim of this wasn’t to make a complete dissertation on the first two episodes of the show, but rather to share everything that made this spectacular scene so special. I hope you’ll read the rest of the entries in the first ‘Heroic Highlights’ dropping this week and keep in mind that on Friday we’ll be adding a poll so you can vote on the answer you agree with the most. I look forward to hearing from you all and until next time, stay healthy!