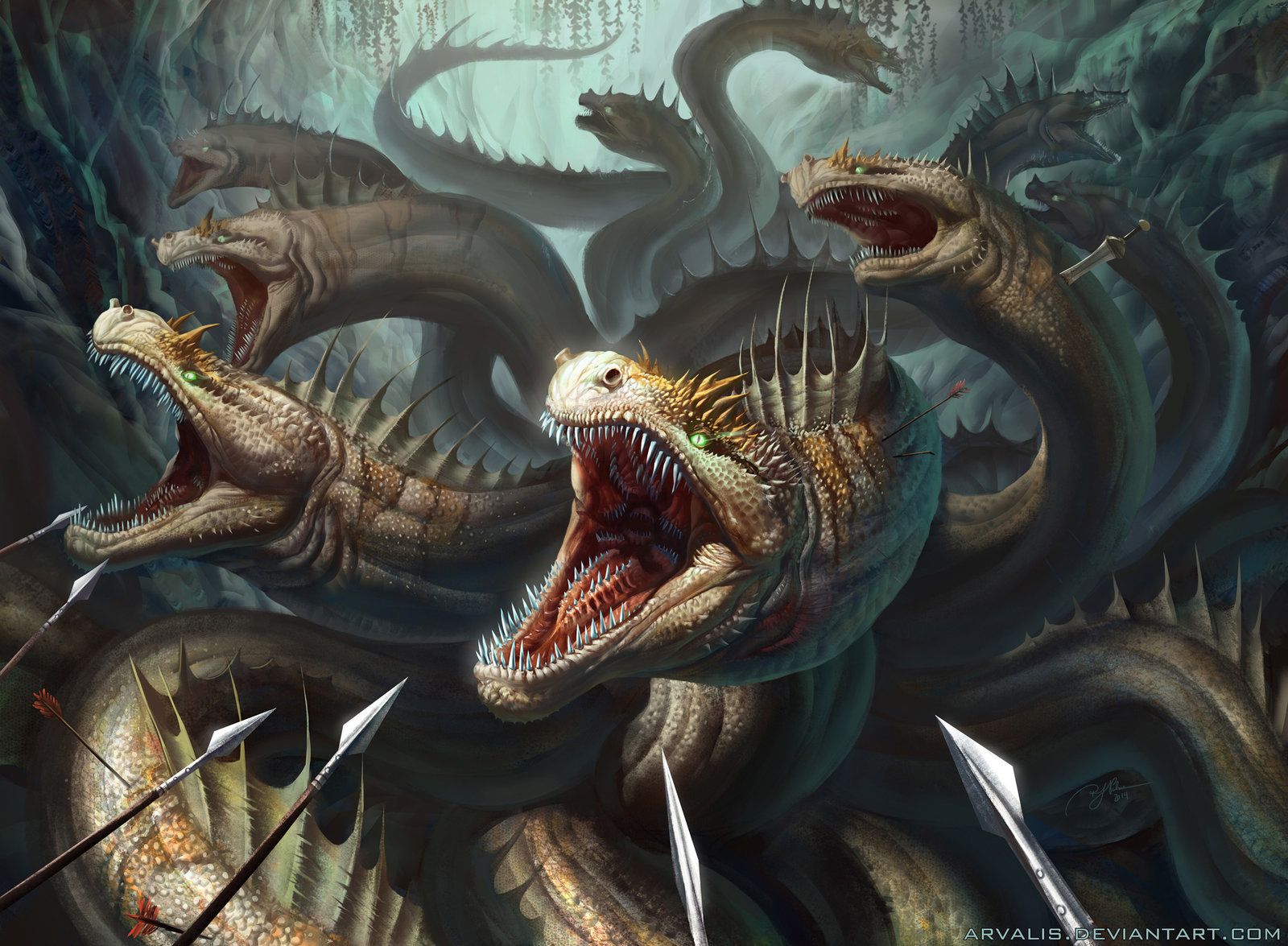 Normally my fabulous guides involve a look into the lore of the monsters I’m presenting, how to roleplay them, the best ways to incorporate or even shape a campaign around the monster and fun little tidbits. Not today. Today, we’re talking death and destruction, no hoops to jump through. You see, Hydras don’t have an advanced social hierarchy, grand political desires or plans for world domination. They are simple creatures that act on instinct and eviscerate whatever they are able, dealers of destruction and death. Therefore it is imperative that you understand how they prefer to deal their death, how they will act in a fight and exactly what makes them so deadly.

The first thing to be discussed in any conversation about Hydras is how they function in this universe. Hydras have appeared in literature across time, with different rules and abilities between numerous iterations. When one thinks of Hydras the first thing that comes to mind is their regrowing heads. This ability is specific to one type of Hydra, the Lernaean Hydra. In Dungeons and Dragons the Lernaean Hydra is the standard and functions as one would expect, if one head is cut off two shall grow in its place. Additionally fire damage to the wound of the severed head will stop the regeneration from taking place in most instances. Hydras will naturally have anywhere from 3 to 12 heads depending on age and breed, but a Hydra that has survived many battles can have as many as 50 heads if they’ve had them lopped off without dying. Additionally each head has enough sentience to act on its own instincts, which are admittedly rather simplistic and aimed at eating whatever gets in their way. Sometimes this can lead to conflicts of interest between heads that can end up with them attacking each other. Examples of this include fighting over a fresh carcass in the middle of combat, devouring one another when afflicted with extreme hunger, and bumping heads as they go for the same prey.

In combat they are vicious foes. Every head can make an attack on its turn and the Hydra is extremely hardy. If the party doesn’t take necessary precautions, 5 or more attacks a turn can be really hard to deal with, and there’s also the potential for more heads to spawn and add even more attacks. Fighting it in melee range without a plan or distraction is a surefire recipe for disaster as each head can make an attack of opportunity against fleeing targets. While this could make it appealing to have all of the heads gang up on one target, it is important to remember the nature of these creatures. Each head wishes to attack the closest target, so if there is a warrior on its left and right, the leftmost heads will assuredly gang up on the left foe and vice versa. They don’t have any grand tactics in combat; if one prey is clearly more delectable, because of size or because they’re already bleeding badly, that could be enough to cause all heads to override their normal instincts. Overall they simply attack either what’s closest or what hurt them most recently. And that’s good! Not every creature needs to require a strategy guide to pilot it towards its fullest potential and sometimes simple but brutally efficient monsters can be a breath of fresh air.

Hydras also have 360 degrees of vision from their various heads and always sleep with at least one head awake, making ambushing one a challenging task. Poisons and gasses are ineffective unless you can manage to affect all heads at once; a single head being able to breathe normally is enough for it to ignore inhalants and toxins. While not impossible, trying to kill a Hydra by damaging its body rather than its heads is about as difficult of a task as is possible in Dungeons and Dragons; not only do the heads get in the way and protect it, but its hide is simply absurdly durable and would require tenfold the effort to kill it as it would to simply remove each head.

In addition to the traditional kind that’s quite well known, there are a decent chunk of variations. However the differences between the Hydras are much more minute than the differences between types of Hags, Dragons and Demons, and thus they don’t warrant getting individual sections to discuss them. The biggest difference to note is that most of these other types of Hydras do not regenerate their heads when one is severed. When one of its heads is lost, it will immediately remove all blood flow and muscle control from that neck so as not to bleed out, causing it to become limp and useless even if most of the neck is still intact. It will drag its neck around until it is no longer in danger, at which point it will feast upon the neck stump until no traces of the lost head remain. Pyro and Cryo Hydras, that is Hydras that were infused with flames and ice respectively, can be particularly nasty buggers capable of the normal carnage Hydras output as well as firing elemental blasts from each of their heads. Distinguishable by their colors, Pyro Hydras have red scales and Cryo have white and/or purplish colored ones. They have resiliency to their respective element and with the added area of effect damage their heads add, it can make them terrifying horde breakers, and will punish players that group up in hopes of spreading the attacks across each other.

Now if you’re not satisfied with just throwing one or two of them into your campaign and instead really want to try to set them up to be pivotal to the story… well I suppose I can share a plot line with you that I’ve been dying to try out for a while. The idea behind this campaign is that some force, be it one of the deities like Tiamat, a powerful artifact or even just a madman with enough power, has given Hydras sentience. They’ve gained the ability to speak, the ability to use strategy and some have even inherited magical powers like the ability to cast spells. This awakening in the Hydras spells catastrophe for all the humanoid races in the area as Hydras begin coordinated assaults on settlements and using tactics to completely overwhelm kingdoms. One of the main balances to Hydras is their isolationist lifestyle and their primitive intelligence. With those weaknesses removed they stand a legitimately dangerous threat at wiping out or enslaving all other life. The fantasy equivalent of The Rumbling, the party and the world would be scrambling for either some weakness to exploit or some way to revert their awakening in order to save themselves. A campaign structure like this will require a lot of homebrewing, and I don’t suggest starting the awakening until they’re at least level 5 if you want them to feel like they have any sort of chance at succeeding. All this can culminate with a Hydra lord with numerous heads and magical powers on each of them that the party has to find a way to negate.

And… that’s a wrap! While Hydras have no where near the complexity or RP potential inherent to other monster types like Hags and Demons, I just think they’re really damn cool so I felt I had to cover them. From Greek mythology and stories inspired by it like Percy Jackson, I’ve always found encounters with these beasties to inspire such panic and dread. You slip up even once and you will get absolutely annihilated! This post was a bit differently formatted than usual, but I hope that didn’t detract or distract you guys! I’ve got a really special surprise for you guys next time, so I hope to see you there! Until then, thanks for reading, I hope you’ve enjoyed, and until next time, stay hangry!