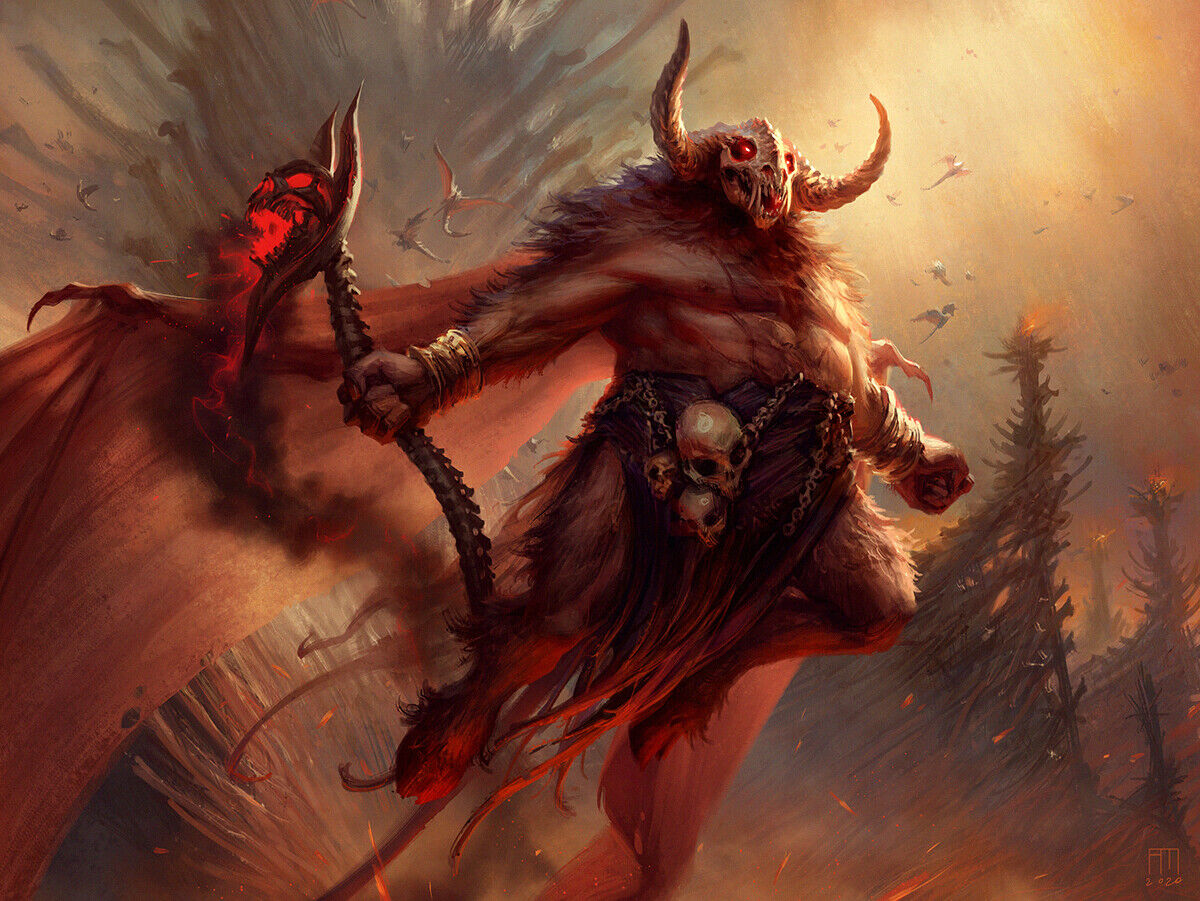 In the past we gave you a good understanding of the various species of Demons as a whole, none of which can compare to those at the upper echelons of power in the demonic caste: Demon Lords. In total there are close to 20 Demon Lords you can draw inspiration from, split into two categories: Old Demon Lords (Obyrith) that were dethroned by a massive revolution and the current Demon Princes. We’re just going to be discussing two of these Demon Lords, Yeenoghu and Orcus. If you’re curious about the others, I highly encourage you to read up on them, as a lot of them have really interesting lore behind them. If demand is high enough I can create guides like this for all the Demon Lords, but for now I wanted to start with two of my favorites. First we’ll discuss the Demon Lords themselves and then we’ll discuss campaign outlines centering around each of them. An important thing to know about the Demon Lords is that while they can be ‘slain’ in battle, they will reform themselves in their lair in the Abyss after a while. To truly kill one, you must slay them in their home, but beware for they are greatly empowered whilst there.

First up on the chopping block is Yeenoghu (CR 24). He has many titles, his most well known being ‘The Demon Prince of Gnolls.’ His other names include Ruler of Ruin, Beast of Butchery, Lord of Savagery and the Destroyer. Fueled entirely by the desire to destroy, those who worship him are given but a single tenet to follow: kill. That is all it takes to earn his favor and the more gruesome the better. Towering about 15 feet tall and covered in patchwork armor taken from the corpses of his victims, his mere presence inspires awe and fear in even the boldest of veterans. His motives are the easiest of all the Demon Lords to understand, all his ambitions and plans revolving around pure destruction.

His demands are simple: kill. Follow his commands, and you shall know blessings beyond your dreams.

As the Prince of Gnolls, Yeenoghu greatly favors them over any other race. Those he favors can earn his blessing, making them even stronger and more savage than normal, and able to share their power with others. Both he and those he blesses are capable of spawning powerful Demons from the corpses of his enemies and can cause mortal creatures to transcend into Demons. While he favors destruction, it’s more than just the kill that pleases him. Inflicting terror in his foes as he shatters their hope is the seasoning that makes every kill all the sweeter. While utterly savage, Yeenoghu isn’t stupid. He is more than capable of trickery, subterfuge and subtlety, he just chooses not to in almost all circumstances.

Orcus (CR 26) is the Demon Lord of Undead, with a perverse mastery of necromantic magic that would make even the most ancient of Liches green with envy. Where Yeenoghu cares for Gnolls and Demons that serve him, Orcus despises all creation outside of himself. His hatred includes even his servants, worshippers and Undead creations. His obsession with undeath was born of his hatred for all other life, as he views himself as a perfect being, and the only one worthy of existing. Only when all other life in the universe is dead (and/or Undead) will the world be perfect, for then only that which is perfect will remain. His other titles include the Blood Lord, Goat-Horned Demon, The Shadow That Was, Lord of Specters and Master of Vampires.

His mastery over undead is perfectly encased in his favorite tool, ‘The Wand of Orcus’. This artifact is so powerful that merely touching will kill those he does not deem worthy. When properly utilized, it allows the wielder to create undead from thin air each day, functions as a +6 unholy chaotic mace, and plague other creatures with tons of negative conditions. Orcus often loans his wand out to particularly promising and devoted followers, as the near endless supply of Undead it can make even intermediate Necromancers into potent forces capable of threatening nations.

I will be the last creature when I am done. The cosmos will then be perfect, free of the braying abominations that are all other living things.

A campaign centered around Orcus can have a deceptively normal beginning and middle that then quickly descends into total chaos once the truth of the situation gets revealed. You can use a classic Undead campaign start since Orcus is all about Undead. Hordes of Undead are attacking cities, brought by a group of new cultists who have suddenly been given a boon from Orcus. Their Undead creations are even more powerful than usual, with some even capable of raising more of their kind. Whether or not this blessing takes the form of Orcus’ Wand is entirely up to you, but the cultists should ideally NOT worship Orcus publicly and you should leave as few ties to him as possible to misdirect the nature of this blessing. Orcus would not want the world to know he’s making any moves at the prime material, so he’d do his best to try and manipulate things from behind the scenes until the board is set.

The goal of the cultists can be whatever fits the needs of your campaign best, be it simple or complex. Some simple goals could be wishing to attain enough power to rule the country or to gain enough strength to ascend to godhood. If you’re looking for something more nuanced, perhaps they’re killing people to harvest perfect body parts from the sentient races and gathering them in hopes of creating a new race of ‘perfect beings’ using only the best pieces. Maybe they’re trying to amass enough reputation so they can infiltrate an evil and powerful cult and destroy it from the inside. Ultimately their goals will go unfulfilled, serving mostly to help you understand how they’ll interact with the world and to act as a red herring for what’s really happening. Once the material plane is sufficiently weakened by the efforts of the cultists, most likely just as the party is about to finally defeat them, Orcus will begin his conquest. Hordes of Demons and Undead alike will begin pouring out relentlessly and will hit major cities that have been weakened by the cultists, hoping to steal them as outposts to direct his war efforts. From there, the party and the world will be focusing more on containment than victory, trying to minimize damage and retake cities whilst seeking out a plan to stop Orcus. Whether that plan involves finding a powerful artifact (a McGuffin), gaining the favor of literal gods or simply amassing a large enough force to bring the fight to him, you should make sure this section of the campaign fits the type of play your group enjoys best. Don’t bore a group of combat enthusiasts with political intrigue. This quest line should either lead to a final confrontation with one of Orcus’ generals (most likely a Balor) or the big guy himself, but whichever final boss you choose should convince Orcus to give up on his plans with their defeat….For the time being.

If you’re looking for savagery from minute one, a real bloodbath of a campaign full of carnage and conflict, look no further than Yeenoghu. Being the patron of Gnolls gives you access to a severely underused type of enemy. They’re a race of tribal Hyena-folk that love to raid, raid…and rage. Yeah, that’s pretty much it…but they’re pretty damn good at it, so who can blame them? Right out the gate you can come swinging, pillaging caravans and raiding villages the players have connections to. Gnolls are usually a threat, but this pack is far too coordinated and powerful; Clearly something is wrong. After the Gnolls raid a village and begin piling the bodies up in the center, it becomes clear just what is happening. An offering to Yeenoghu that brings forth a swarm of Maw Demons. The Maw Demons will devour the corpses they piled up, but quite quickly they’ll run out and move on to the citizens still left in the town. All this is just the start of what a campaign with Yeenoghu can bring.

This Gnoll pack is led by an Alpha Matriarch that has received Yeenoghu’s blessing and every minute she remains alive she’ll draws power from the Abyss. Capable of summoning Demons to her side and branding Gnolls with a fragment of Yeenoghu’s power, she makes their forces deadlier with each passing day. How the party defeats this pack is up to you, but it shouldn’t be easy. One method could involve them gaining favor with the military of various governments/groups, another could be seeking out artifacts in old ruins to nullify/counter her powers. This should be whatever type of questline you think your party will enjoy the most. The end goal of the Gnoll packs is always to bring Yeenoghu to the material plane. Once he arrives, he has but one goal in mind: to wipe out any and all civilizations he can before he is sent back to the Abyss. His presence can be enough to unite warring nations to band together in order to try and stop him and can lead to some unexpected alliances amongst races and peoples that normally despise one another.

And… that’s a wrap! Demon Lords are the pinnacle of their kind and can create some of the greatest enemies in Dungeons and Dragons. They are a brutal combination of overwhelming power, an unshakable desire to harm the mortal world, and the ability to recover from death. Join me next time where we will discuss Hags, a classic enemy trope both in and out of Dungeons and Dragons. Thanks for reading, I hope you enjoyed, and until next time stay hashy!