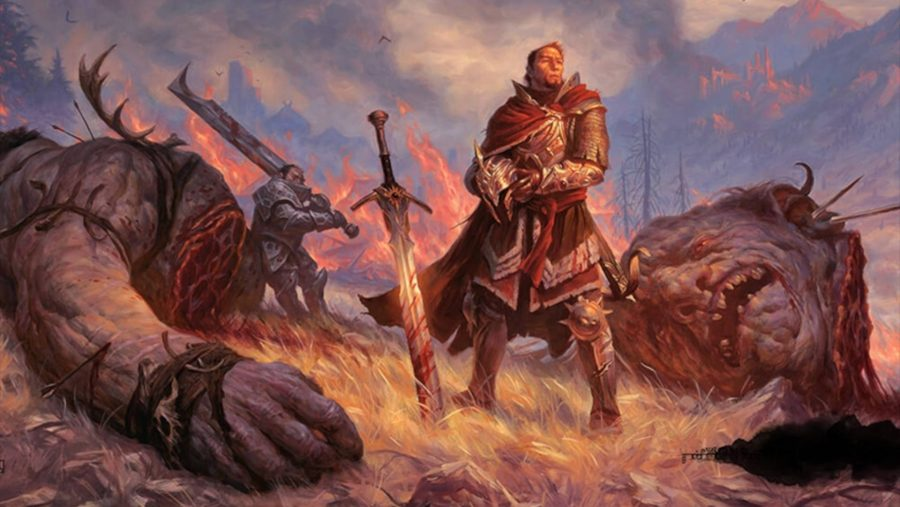 “The Hero’s Journey” is a format that can be seen in stories everywhere. Star Wars, the Lord of the Rings, Harry Potter, even comedies like Liar Liar and Shrek share this pattern. In simple terms, it details a person who receives a call to adventure, overcomes challenges and temptations with the help of others, and grows into a more complete person from it. It is a road map for character arcs. Character arcs are important, nearly mandatory, for well crafted stories. They give the audience a journey to follow with the character, which leads to a natural flow that helps set pacing and ends in a payoff for those sticking with the story until the end. Change and growth are constants in our life and seeing characters grow from struggles can lead to vicarious growth in us too. So how do we incorporate this into a DnD character? How can we play a character for potentially 10’s to 100’s of sessions and plan an arc of growth for them? Does planning how our character will change make said arc less authentic in a format built around group play?

Firstly, how do we incorporate this? First and foremost, we need to make characters that lack something important or believe something untrue. Believing they’re unworthy of love, that all of “x” thing is one way, thinking that “x” is the only thing that can lead to happiness all are common approaches. Whatever route you take, if it’s something that covers really serious topics, make sure you talk to your group and make sure everyone is comfortable with it. In roleplay heavy groups, that can honestly be all it takes for the character arcs to happen authentically, but if you want extra insurance that an arc will happen there are a couple more steps you can take. Talk with the DM of the game and discuss what you envisioned initially, and ask if they can help facilitate said growth. Second, make sure you make this information known and play into it, ESPECIALLY if it creates tension and conflict. Conflicts lead to growth, just make sure you aren’t constantly derailing the game and other players’ scenes by inserting your characters issues. And once your arc is complete, remember, there is absolutely nothing that says they can’t have another arc and continue to grow as an individual.

When making your character, have an idea where they’ll go. Whether you’re a player or a dungeon master, one piece of advice I find holds true universally is that it’s good to have a plan for what will happen but expect and prepare for those plans to change. Often for the better.

A great example from personal experience as a DM comes from an NPC knight that the party had earned the favor of, who ended up swearing service and protection to the party. He was slated to finish his arc by dieing to protect the party from an extremely powerful enemy, which would help set the tone for his plans and just how powerful he was since the knight was no slouch. But at the appointed reckoning, the party risked life and limb repeatedly, and managed to Rube Goldberg their way into pulling him out of the clutches of a terrible beast’s maws and ride away via horseback whilst giant eagles distracted the enemies. It made the scene all the better and in saving the knight they had rewritten the story to take a more interesting turn. His need to be rescued led him to doubt himself and begin taking a journey of self reflection, as his purpose seemed shattered when he was immediately incapacitated in battle and had to be saved by his wards. It also added an extra piece in the story going forward that wouldn’t have been there otherwise, creating more possibilities.

When creating a character arc for a person in a book, show, movie, or video game, the path of growth is clearly mapped out with every step of the journey being shaped to fit this path. There are no surprises for the creator along the way aside from new ideas sparking edits/rewrites of the story. The beauty of character arcs in DnD is that they’re non-linear, ever changing, never ending, and affected by everyone else’s character arcs. You can have an idea in your head of how you want your character to progress, but it can end up being the exact opposite, yet end up more interesting and fulfilling in the end due to how fluid and chaotic the medium can be. And you may think your character has finished their growth, but then events conspire in such a way to elicit further development. Your character growing can cause shifts in the other party members and NPCs, and the reverse is true as well.

Lastly, it is imperative that you actively play into the arcs of fellow players. Pick up on their character traits and flaws, call their characters out on it occasionally to help create scenes that spark growth. Recognize when scenes are meant for other characters and give them the spotlight. Be a considerate player that encourages growth in other, and they’ll return the favor and facilitate your growth.

And… that’s a wrap! Character arcs are like the spice that can turn a good meal of a story into a great one. I hope this helps enrich your experiences at the table and helps make your characters feel that much better. Join me next time where I discuss how to play evil characters, why they’re stigmatized so negatively, and how to keep the experience enjoyable for yourself and the other PCs while you do so. Thank you for reading, I hope you enjoyed it, and until next time, stay healthy!